Dungourney and Newcestown met at Riverstown on Sunday in the first round of the county junior hurling championship. Despite many other GAA fixtures in East Cork, a very large crowd attended, and weather conditions were ideal for the clash between the champions from their respective divisions. The men from the South-West looked the stronger and heavier combination, but what the Dungourney lads lacked in this respect they very well made up for with a fine fighting spirit and determination and were not prepared to accept defeat till the final whistle. They had to line out with-out two of their most prominent players from the East Cork final-Michael Cahill because of a recent family bereavement, and Michael Hayes who was unable to make the journey from his college in Wales.

R. Cullinane who came on as a sub in the East Cork final, took the place of M. Cahill, and for one so young and inexperienced a player he really covered himself in glory. Prior to the game a minutes silence was observed in memory of the late Richard Cahill of Dungourney.

Dungourney won the toss and elected to play against the sun and a strong breeze. They were first to break away from the throw-in and M. Rohan sent a long ball to the Newcestown goalmouth. This attack was readily repelled by the very resolute defence. Newcestown had the opening score, a point in the third minute. Michael Ahern equalised for Dungourney three minutes later. Then Frank Kehily was through for his first goal on the tenth minute. Dick Walsh had a point from a free for the East Corkmen shortly afterwards. Play was fast and furious at this stage, and there was little room for frills or fancy hurling. Newcestown wasted many scoring chances in this half but still managed to add a further goal and a point to bring their half-time total to 2-2. Dungourney had two further points to bring their tally to 0-4 at the half-time whistle.

Dungourney playing with the sun and wind advantage in the second half, were expected to take the initiative in this period, but it was Newcestown who took over again and added two further points in the first five minutes.

Dungourney were finding it hard to penetrate the well-knit defence of their opponents, where senior county player Paddy Crowley starred at full-back. In the 40th minute D. Walsh had the opening score for East Corkmen, a point from a close-in free. Newcestown replied with a similar score four minutes later. Dungourney made some positional changes at this point but they did not not seem to have the desired effect. Their great centerfield payer, Mick Mahony, who was having a good game up to this, added a point from close on 70 yards out. Newcestown were back again for another minor score with ten minutes to go, and had yet another two minutes later.

It looked at this stage that the men from the South-West were well set for victory. Dungourney introduced two subs, Davy Hennessy and Maurice Ahern, who by the way had three brothers already playing, and one of them right half forward Michael, sent over a nice point from fifty yards. Shortly afterwards Maurice gained possession twenty yards out and crashed home a great goal. This was the long delayed tonic the men of the Green and Gold needed. Now the stage was set for this dramatic final scene.

Backed by the resounding cheers from the huge East Cork following, the Dungourney lads set about the task in great fashion. It looked at last as if this impregnable barrier could be penetrated. Who then could be more fitting to play the leading role in this grand finale than their great centre-forward, Anthony Kelleher, nephew of the Dungourney All-Ireland captain. He raced across for a ball to the left wing, gained possession, side-stepped his opponent for an opening in the left corner, and from a difficult angle sent a lightning shot for goal. The ball crossed the goal line, went through the side-netting well inside the right-hand goalpost.

The umpire holding the white flag J. J. Kelly, indicated to the other official that a goal had been scored. This was ignored however, no green flag was raised, and so Dungourney were deprived of this very vital score at a crucial stage of the game. They should have been one point ahead at this period, and with less than five minutes to go it is very doubtful of they would so easily concede the goal the winners got before the final whistle. Incidentally everybody who was close to the goal area, including the Newcestown defenders, admitted afterwards that the goal had been scored.

The East Corkmen however need not be despondent, as with so many young players of the calibre of Richie Cullinane, Maurice Ahern and Dave Hennessy to call upon, their prospects for the future are bright. Returning thanks to the Dungourney dressing-room after the game, the Newcestown captain Sean Crowley, outstanding centre-field player and fine sportsman, stated that his team-mates and himself were honoured at having played against and naturally having defeated a team with the great hurling tradition that Dungourney could lay claim to. He also admitted that it was one of the most sporting, hardest and cleanest games he had ever played in.

Masses during the Week: Masses on Monday to Friday at 9.30 a.m.

Adoration of the Blessed Sacrament in Dungourney church on Thursday at 8.00 p.m.

Mission Sunday: The annual collection for the missions and the work of missionaries will be taken up this weekend. You are asked to please give generously.

We welcome the First Holy Communion children and their families to the 11.00 a.m. Mass on this Sunday. They will play an active part in the liturgy of the Mass.

Icon of the Holy Family: The Icon of the Holy Family, which was commissioned for the World Meeting of Families in Dublin, will visit St. Colman’s Cathedral, Cobh on Friday, 27th October. 6.30 p.m. – arrival of icon and evening prayer. Sunday, 29th October – 12.00 noon Mass – Bishop William Crean presiding. Sunday afternoon – period of veneration of the icon and adoration of the Blessed Sacrament. (see poster in church porch).

Family Prayer Book: Copies of the Diocesan Family Prayer book are available at the back of church. Please take a copy home.

All Stations are at 8.00 p.m. (unless stated otherwise) A date for the postponed Clonmult Station will be printed next weekend.

The Joy of Love in Marriage: A Marriage Encounter Weekend offers married couples (of all age ranges) private time to rediscover the joy of their love. The next residential weekend will be from 17th to 19th November 2017 at the Lake Hotel, Killarney. For info and to book, visit www.marriageencounter.ie or call 0866095168 or 0646644319.

Anam Cara: The organisation that supports bereaved parents is holding its next monthly Parent Evening on Wednesday, 1st of November from 19.30 to 21.00 in the Clayton Hotel, Silver Springs, Tivoli, Cork. This event is open to all bereaved parents regardless of the age your child died, the circumstances of their death, or whether the death was recent or not. www.anamcara.ie or 0862888888.

Social Dancing: Clonmult Old School this Sunday, 22nd October, 8 to 10 pm. Music: Martin Kearney & One For The Road. All are welcome.

Masses during the week: Monday to Friday at 9.30 am.

Adoration of the Blessed Sacrament in Dungourney Church on Thursday at 8.00 pm.

Mission Sunday: Next Sunday is Mission Sunday; the annual collection for the missions and the work of missionaries will be taken up. You are to please be generous towards this collection.

The Faithful Departed: Anniversaries, Nancy Robinson. May she rest in peace.

Dungourney, one of the glamour teams in the early days of the Association and with senior hurling championships to their credit in 1902, ’07 and ’09 had to wait until yesterday to win their first East Cork Junior A hurling championship when they defeated Bride Rovers in the final at Midleton.

Beaten in the two previous year’s finals, yesterday’s win was one of the most popular achieved by any side in recent years. Rain fell continuously during the game but this did not affect the play and the standard was one of the best seen in years.

Dungourney, having the wind and rain advantage in the first half, opening the scoring with a point but Bride Rovers replied almost immediately and when the winners went two points clear, Bride Rovers again levelled matters. A point to each side left the score 0-4 each at half time.

The cup, which is appropriately named the Jim Kelleher Memorial Trophy, was presented to Dungourney amid scenes of unprecedented enthusiasm that even the rain could not dampen. Prior to the game a two minutes silence was observed to the memory of Joe Foley of Sarsfields who was the first treasure of the Divisional Board.

Masses During the week: Masses Monday to Friday 9.30 am.

Adoration of the Blessed Sacrament in Dungourney Church on Thursday at 8.00 pm.

Fr. Mike Barry will celebrate Mass at Leahy’s Open Farm on next Thursday, 12th, October, at 7.30 pm. All are welcome.

Holy Rosary Novena continues each evening at 7.30pm until Friday the 13th at the Holy Rosary Church, Midleton.

Adoration of the Blessed Sacrament in Dungourney church on Thursday at 8.00 pm.
Last Week’s Collections: Door – €272.56. Thank you.

Diocesan Collection: The usual monthly collection for Diocesan Purposes will be taken up at the Masses this weekend.

First Friday: Holy Communion will be brought to the sick on Friday morning.

The First Saturday Devotions: Continue next Saturday in Clonmult. Rosary and prayers at 9.45 a.m. followed by Mass.

The Faithful Departed: Anniversaries, Patrick Casey and Patrick Cronin. May they rest in peace.

Readers Rota: New lists for the readers in both churches are now available and can be collected in the sacristy.

Permanent Diaconate: Congratulations to John Nestor & Eddie Mulhare on their ordination to the Permanent Diaconate last Sunday. We wish them well in their ministry.
Holy Rosary Novena: From Oct 5th-13th, in Holy Rosary Church, Midleton, a Novena to Our Lady of the Rosary will be held. Each evening, beginning at 7.30pm. Details of Novena on www.midletonparish.ie/novena. The evening before the Novena begins (Oct 4th, 8.15-9.15pm) Fr Éamon Roche will lead a workshop in Midleton Park Hotel entitled “Prayer-Guidance and Practical Tips on Reigniting one’s prayer life, with reference to the Rosary and Adoration” All Welcome.

Leahy’s Open Farm: Brother Johnson (India) will be at Leahy’s on next Tuesday, 3rd October from 6.00 p.m. to 10.00 p.m. Prayer and healing through scripture. All welcome.

The Legion of Mary: Is a lay Catholic organization, who meet weekly, and say the Rosary and Legion Prayers, decide on works, i.e. hospital visitation, nursing home visitation, visit elderly and housebound, and help priest in different duties. If you are willing or interested to get involved, please contact Fr. Frank on 0868395305
Spiritual Exercises of Saint Ignatius: A silent retreat will take place at St. Aidan’s Monastery, Ferns, Co. Wexford, for women aged 18 years and up. From Friday, October 27th to October 31st 2017. Places are limited. Please book early. For more information contact 0858235525.

Pro Life: On this Sunday, 1st October there will be a “Pro Life” meeting at the Silver Springs Hotel Cork. Three Ladies will share their experiences of pregnancies through rape and who will tell why abortion is not the answer. All welcome.

Clonmult Church Harvest Thanksgiving Mass: The Church was beautifully decorated for the harvest Mass on Friday night. It is indeed a credit to all involved, each year you come up with new ideas, lifting the standard at all times. Thanks to all who participated in organizing this wonderful display of harvest foods.
A visit to St. Lawrence’s Church, Clonmult, this week is a must to really appreciate what is on view.
Thanks once again to all involved. 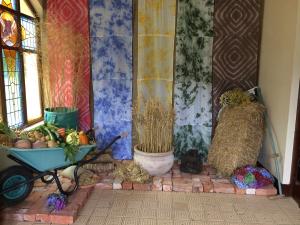 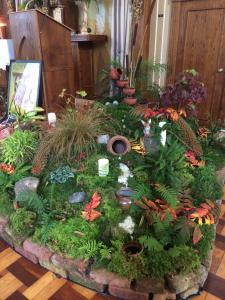